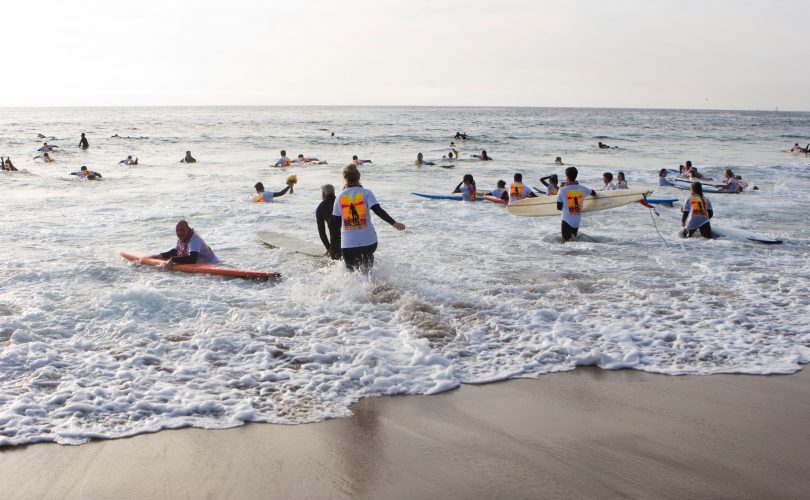 Dozens of people donning wetsuits and carrying surfboards made their way to Oak Street Beach in Laguna Beach on Monday to pay tribute to a friend, son and brother. They paddled out into the water to form, in time-honored tradition, a floating memorial. Tim Vorenkamp died a year ago after a five-year battle with a rare form of , and his friends and family wanted to mark the first anniversary of his death and raise money for his Live for Others Foundation. Vorenkamp, a surfer, had been battling ill health since 2010, when he was 13 and diagnosed with Stage 3 synovial sarcoma.

“At the time it was scary,” Tim said in a November 2015 video posted on the foundation website. “I had a huge lump growing on my leg.”

He said people who cared about him cried upon learning the news of his illness, but he had a different reaction. “I was smiling, I was happy,” he said. “I knew it was not Stage 4 at the time.”

During the paddle-out Monday, Pieter Vorenkamp recalled the approaching end of his son’s brief 18 years.

“It was December [2015] when he knew he only had a few weeks to live,” Pieter Vorenkamp said. “He could have sat at home being in misery for himself, but he didn’t.” Instead, Tim founded the Live for Others Foundation to raise awareness of and promote a cure for synovial sarcoma.

“He really wanted to do something for the community before he passed away,” his younger brother Patrick Vorenkamp, 16, said during the ceremony. “He wanted to stop synovial sarcoma because he knew it was so terrible.”

The paddle-out, which also benefited the foundation through ticket and merchandise sales, drew more than 100 guests to Oak Street, where Tim and Patrick often surfed. The Vorenkamp family knew rain was possible, but as surfers started to zip up their wetsuits, the sun peeked through the clouds, blanketing them with warmth and light.

Patrick was the first to paddle into the ocean. More than 30 other surfers followed his lead.

A standout volleyball player too

Tim grew up in Laguna Niguel and graduated from JSerra Catholic High School in San Juan Capistrano. The family had a second home in Laguna Beach, where Tim could walk to Oak Street beach to surf, said his mother, Petra.

“His big passion was volleyball,” Petra said, adding that multiple universities, including UC Irvine, recruited him to play.

But the disease took its toll. Tim’s fight with the aggressive cancer involved chemotherapy and radiation treatments, nearly 10 operations — including two major lung surgeries — and hundreds of doctor visits.

“The cancer kept coming back and he could not play anymore,” Petra said. Tim attended UC Berkeley for a portion of the fall 2015 semester.

Synovial sarcoma is a rare tumor of the soft tissues, usually around joints, according to the Dana-Farber Cancer Institute in Boston.

Synovial tissue is found around tendons and can form fluid-filled sacs. Symptoms can depend on the size and location of the tumor and include swelling or massing, with or without pain, and limping or difficulty using legs, arms, hands or feet. The condition, which tends to occur in adolescents and young adults and affects more males than females, accounts for less than 1% of new cancer cases each year, according to the institute’s website. Even with the disease, Tim inspired others with his perseverance, his mother said.

“He was always positive and motivated other people,” Petra said. “He felt God was involved in this.”

In the last week of his life, Tim awoke one day with a “big smile and his face and said, ‘Heaven is for real,'” Petra said. “It still gives me chills.”

His video reveals much about his spirit. “Over the last five years, I have not thought about it that much,” Tim said in the video. “Worrying about your disease, or worrying about what is going to happen, would cause it to happen. By not having to think about it and cherishing every moment I had, it brought the most happy five years I’ve ever had.”

‘He was the ultimate student’

Students at JSerra, including members of the new Live for Others student club, which raises funds and awareness for rare cancers, helped organize Monday’s event. “He was the ultimate student,” said Carol Chaffee, director of JSerra’s business magnet program. “He never used excuses when he was dealing with his illness.”

Tim’s foundation announced last week that it had raised funds for its first grant, $50,000 for Dr. Bang Hoang at the Albert Einstein College of Medicine in New York City. Hoang performed Tim’s first major surgery in 2010, according to a foundation release. The grant, raised by donations, will enable Hoang and his team to experiment and examine the susceptibility of synovial sarcoma.

“Battling cancer, you never lose and you never will lose,” Tim said on the video. “If one day the fight ends and something like that happens, you never lose to it. You just start a new journey.”


Error: API requests are being delayed for this account. New posts will not be retrieved.

Make sure this account has posts available on instagram.com.