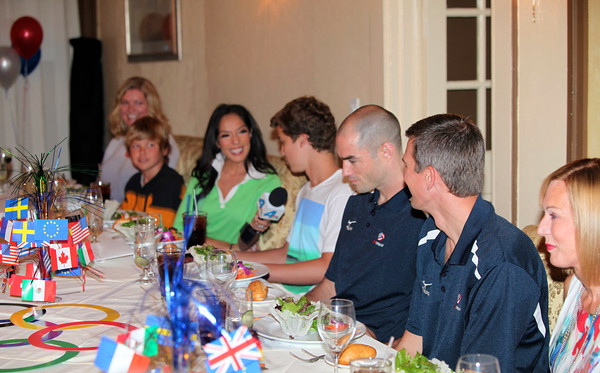 Thanks to the Orange County/Inland Empire Make-a-Wish Foundation, Tim, his parents and litte brother are going to be heading to the London Olympics to hang out with the U.S. men’s volleyball team.

Some members of the team were on hand Saturday at an Anaheim restaurant as the foundation made the teenager’s dream come true.

“It’s just amazing to be with people that you watch on TV and that you want to become when you’re older,” Vorenkamp said.

Tim has a rare form of cancer. He was 13 years old when he found a lump on his leg.

At the time, he was competing in the USA Volleyball Boys Junior National Championship division. He’s now in remission but there is a 40 percent chance that the cancer will come back.

“He will never give up,” said his father.

“They asked me how is it to get to here as a mom when your child has cancer. There’s no words to describe it,” said his mother, Petra Vorenkamp.

Olympic volleyball team members Reid Priddy and Clay Stanley were among a number of current or former Olympians to attend the party.

Priddy says he has a great deal of admiration for Vorenkamp.

“Just the fighting spirit that he’s had has been impactful and inspiring,” Priddy said.

“Looking forward to seeing some red, white and blue on you,” Kiraly told the teenager.

Vorenkamp says his goal is to become a member of the national team.

“To be able to join these guys when I’m older,” he said — that’s his vision.

Before Vorenkamp takes off for London, he’ll be joining the U.S. men’s and women’s volleyball teams on Tuesday for a special sendoff from Disneyland.