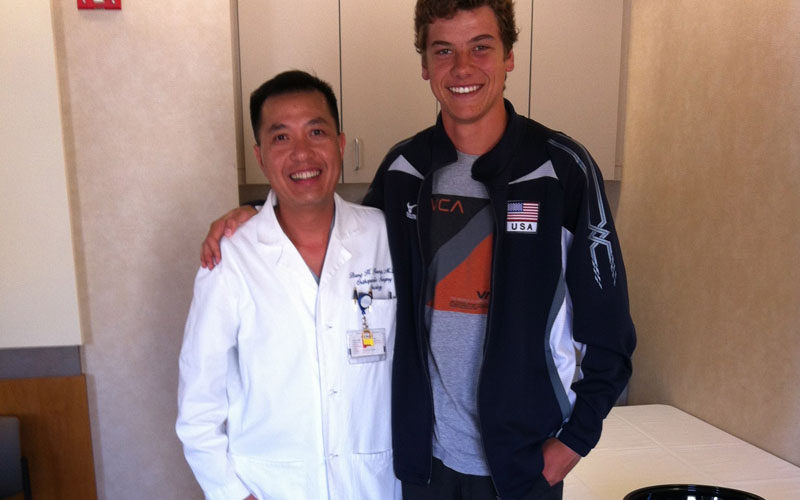 In 2010, eighth grader Tim Vorenkamp walked into the office of Dr. Bang Hoang at the Chao Family Comprehensive Cancer Center at University of California/Irvine with a tumor in his thigh. At that time, the physician-scientist never imagined the journey that would follow. In the seven years since that fateful day, Dr. Hoang, who is now associate professor of orthopaedic surgery at Einstein and co-director of the Orthopaedic Oncology Program at Montefiore, has committed to finding a cure for the disease—synovial sarcoma (SS)—that ultimately claimed Tim’s life.

At the close of 2016, Dr. Hoang received the first grant given by the Live for Others Foundation (LFOF), established by Tim before he died with the goal of helping those with SS have a better outcome than his own.

“Tim was clear that the goal of the LFOF was to find a cure for the disease,” said his father Pieter Vorenkamp, who with his wife Petra is making sure that their son’s dream can be realized. “Petra and I are sure that Tim would be excited to learn that the first grant from LFOF will support Dr. Hoang’s research.”

“When Tim first came to see me, the lump in his thigh was growing slowly,” recalled Dr. Hoang. “We did a biopsy and learned he had stage-three synovial sarcoma. That’s a rare cancer that usually occurs in young adults or adolescents, and it presents as a soft tissue mass in the extremities.”

Dr. Hoang removed the tumor, which he described as being “the size of two iPhones stacked on top of each other.” Tim then underwent chemotherapy and radiation to prevent the tumor from coming back or spreading. By early 2011, he was considered cancer-free.

Unfortunately, SS can relapse. Tim had a second surgery when SS returned in 2013, this time spreading to his lungs.

“Throughout the ups and downs with SS, Tim displayed an indomitable spirit and positive attitude about each diagnosis and treatment,” said Dr. Hoang.

A Commitment to SS Research

Early in his first semester of college, the cancer returned and Tim learned it was incurable. He went home and launched the LFOF. Though thousands of people around the world are diagnosed with SS each year, research of this particular cancer is poorly funded.

Tim succumbed to his battle with SS in January 2016. LFOF awarded Dr. Hoang its first grant of $50,000 at the end of that same year.

Almost all synovial sarcomas are caused by the same genetic mishap: two genes from different chromosomes fuse together, leading to tumor formation. “Because of this specific genetic signature,” Dr. Hoang explained, “we have a clear therapeutic target that also allows us to quickly test the effectiveness of any experimental treatment.”

In earlier research, Dr. Hoang found that the compound flavokawain B (FKB) is highly effective at killing SS cells. However studies of FKB by other researchers had reported damage to the liver. With his LFOF funding, Dr. Hoang is studying an FKB analog, flavokawain A (FKA) that, in preliminary experiments, he and colleagues found can also kill SS cells. He hopes FKA, a natural compound from the kava plant that is nontoxic to the liver and other major organs, will kill the SS cells without causing FKB’s side effects. He will begin his preclinical research in a mouse model of SS later this year, in collaboration with researchers at the University of Utah.

“If effective, we believe FKA will be able to be tolerated long-term,” Dr. Hoang noted. “Those of us researching SS believe that understanding the underlying genetic mishaps of SS cells will ultimately help us to eradicate the disease,” he said.